NEMA Enclosure Rating and IEC Codes, as the universal protection levels of the popular and wide-ranging standard electrical industry, not only provide standards for product design and production, but also facilitate international product marketing.

What is the NEMA Enclosure Rating?

The National Electrical Manufacturers Association (NEMA) defines standards used in North America for various grades of electrical enclosures typically used in industrial applications. Each is rated to protect against personal access to hazardous parts, and additional type-dependent designated environmental conditions. A typical NEMA enclosure might be rated to provide protection against environmental hazards such as water, dust, oil or coolant or atmospheres containing corrosive agents such as acetylene or gasoline.

What are the IEC Codes?

The IP Code, or Ingress Protection Code, IEC standard 60529, sometimes interpreted as International Protection Code, classifies and rates the degree of protection provided by mechanical casings and electrical enclosures against intrusion, dust, accidental contact, and water. It is published by the International Electrotechnical Commission (IEC). The equivalent European standard is EN 60529.

The standard aims to provide users more detailed information than vague marketing terms such as waterproof. For example, a cellular phone rated at IP68 is "dust resistant" and can be "immersed in 1.5 meters of freshwater for up to 30 minutes". Similarly, an electrical socket rated IP22 is protected against insertion of fingers and will not be damaged or become unsafe during a specified test in which it is exposed to vertically or nearly vertically dripping water. IP22 or IP2X are typical minimum requirements for the design of electrical accessories for indoor use.

The digit 0 is used where no protection is provided. The digit is replaced with the letter X when insufficient data has been gathered to assign a protection level.

There are no hyphens in a standard IP code. IPX-8 (for example) is thus an invalid IP code.

The Relationship Between IEC  CODES and NEMA RATING:

In the US, the National Electrical Manufacturers Association defines NEMA enclosure types in NEMA standard number 250. The following table outlines which IEC 60529 IP code each respective NEMA rating meets. Ratings between the two standards are not directly equivalent: NEMA ratings also require additional product features and tests (such as functionality under icing conditions, enclosures for hazardous areas, knock-outs for cable connections and others) not addressed by IP ratings.

NEMA enclosure ratings are similar to IEC IP Codes and can offer the same protections, but cannot be mapped directly. 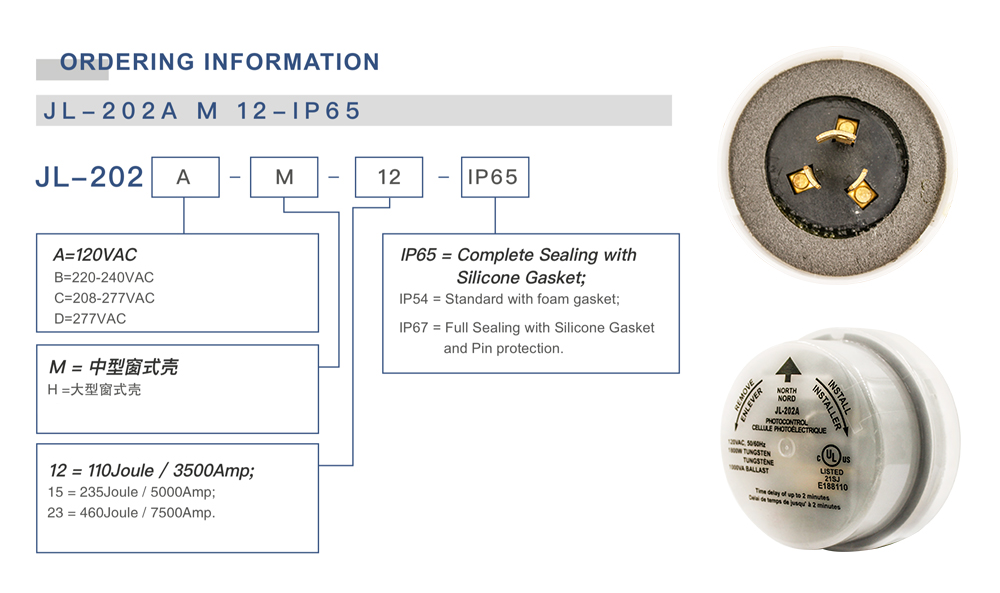 * The First Digit Indicates the Level of Protection that the Enclosure Provides Against access to hazardous parts (e.g., electrical conductors, moving parts) and the ingress of solid foreign.

** The Second Digit Indicates the level of protection that the enclosure provides against harmful ingress of water.The ratings for water ingress are not cumulative beyond IPX6. A device that is compliant with IPX7 (covering immersion in water) is not necessarily compliant with IPX5 or IPX6 (covering exposure to water jets). A device that meets both tests is indicated by listing both tests separated by a slash, e.g. IPX5/IPX7.

The protection level of the JL-202 series of products can be achieved through the technology of Complete Sealing with Silicone Gasket, which can make the street light controller reach the level of IP65, which is based on the explanation of IP Codes:

* The digit 6 stands for Dust-tight /No ingress of dust; complete protection against contact (dust-tight). A vacuum must be applied. Test duration of up to 8 hours based on airflow.

** The digit 5 stands for Water jets/Water projected by a nozzle (6.3 mm (0.25 in)) against enclosure from any direction shall have no harmful effects.

Test duration: 1 minute per square meter for at least 3 minutes

*** By comparing NEMA Rating and IP Codes, you can see that IP66 and IP65 grades are benchmarked with NEMA 4 and NEMA 4X, but they are only used as a reference for international trade and product design. If strict control of parameters is required, careful confirmation is required. Generally The requirements can be compared for reference.

In short, JL-202 IP65 Photocontrol are Dustproof and Waterproof.